Yes, I know I said I was starting with Gimbrin's Mine, but these models were calling to me. I think I'm going to use an armored skeleton model I already own for Ranlac the Black, so all I need are a few dwarves (I'm in the process of gathering the models for them as I wanted adventurer types rather than rank and file soldiers). 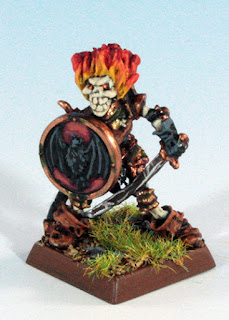 I picked a 3rd or 4th edition Vampire Counts shield for this hero because Gary Chalk's illo shows a corner of Jacsen's shield with some manner of clawed wing. I didn't like the purple and the red I chose is featured on many of  the undead models in my army. 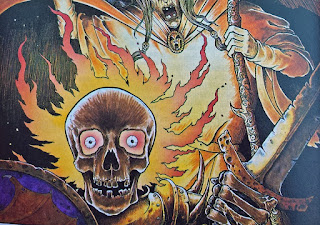 I think I'm going to use this guy as Ranlac the Black... 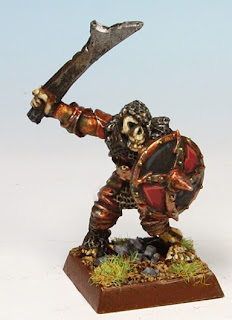 It is obviously different from the official model, but I've probably sunk enough money into this collection for now. I have an unpainted Krell model, but I'm not sure I like it in comparison with some of the other models I have with double handed weapons. He may end up with an axe or scythe in my games.

Switching gears to the first of my defenders of Fruglehofen, here is Gim Grendel! 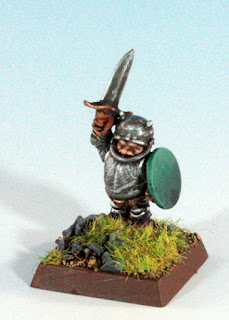 This is one of my favorite models from the early range and I bought him several years ago. The tiny sword blade was broken when the model arrived in the mail. I ended up cutting away the whole right hand and replaced it with a plastic hand and sword from a plastic Empire soldier, cut and filed down to an appropriate length. I still want to do something with the shield, but haven't decided on heraldry or maybe some sort of  hand-daubed graffiti which might be more appropriate for the tiny village.

As long as I'm at the keyboard, I also added a model to my larger undead army, Darius Crowe... 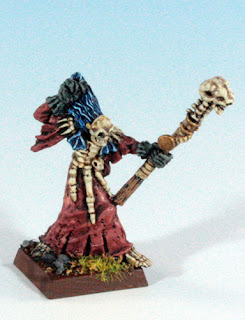 He joins the Lichemaster and Dread Dalgath to provide magical support for the army, ensuring plenty of chances to cast Dance Macabre!

Email ThisBlogThis!Share to TwitterShare to FacebookShare to Pinterest
Labels: Oldhammer, Terror of the Lichemaster, Undead