The first and maybe longest part of the Rogue Trader book is called Combat and contains most of the rules. Ironically, it is also probably the weakest part of 1st edition. Don't get me wrong, the core of the rules presented is strong and largely the same as the game today - roll to hit, armour save, roll to wound, test morale. Dead simple and maybe even elegant. It is when you start delving into the details, maybe again with an eye toward the modern game, that you find the mess that NEEDS a GM (see part one of this series). I'm not going to point out every flaw (remember, I LIKE this version of the game) and I'm not going to cover every section, but I will go through a few problems as well highlight some of the elements I like that are missing from the modern game. As the chapter is so long I will spread this look at the first chapter across several posts.

Personal Characteristics
Models in 1st edition had all of the normal stats still present (Move, Weapon Skill, etc) but they also had four 'Personal Characteristics' - Leadership, Intelligence, Cool, and Willpower. There was a lot of role playing influences in Rogue Trader and these characteristics lent more... err... character to the models. Later versions of the game dispensed with these and rolled them all into Leadership.

Leadership - This was a model's ability to command and follow commands. This stat was used for morale tests in combat.

Intelligence - The main use for this stat was to limit access to advanced equipment. In Rogue Trader all weapons and gear had a tech level and a creature required an Intelligence equal to or greater than the tech level of an item to be able to use it properly.

Willpower - This stat was used to make or defend against psionics.

Now in skimming the book, most creatures had the same rank in Leadership, Cool, and Willpower, with some exceptions (for instance a genestealer had a Leadership and Cool of 10, but a Willpower of only 8). There are rules later in the chapter for generating random characters and you could get some asymmetric stat lines that way. Again, these were gone by 2nd edition (as were tech levels) so it's not hard to see why later versions of the game combined all of these into Leadership. 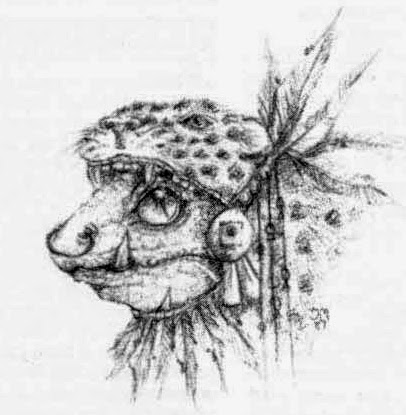 Models for the Game
This small section contains the obligatory "Citadel Miniatures manufactures a large and comprehensive range of Warhammer 40,0000 metal models". However, the majority of the two paragraphs in this section go on to encourage you design your own content, ending with "If you want to invent your own races, or create your own flora and fauna - then do it!"

You can certainly do this in friendly games in the modern versions of 40k, but it's not encouraged in the rules. The best you can usually get away with set in stone army lists is 'Counts As' armies and some venues won't allow even those. To be fair though, the ability to field 'unbound' lists in 7th edition (choose anything you want) can lead to some more creative armies.


Bases
Another oddity from Rogue Trader - the size and shape of the base was not considered critical and players were allowed to use any method they chose as long as it didn't look 'ridiculous'. Most of the combat examples in the book use hex bases, though almost all of the infantry models that appear in photographs are on round bases and large models (like dreadnoughts) are on square bases.