Since I'm planning on taking my time with this model, I thought I'd also take time out to do a step-by-step series for the Macekiller blog. My style is pretty straight forward - a dark base color, a quick wash, and one to three highlight layers depending on the area I'm painting. Each layer is normally painted as flat color with a little of the previous layer showing through, but I might blend layers on large areas. Sometimes I apply glazes over the top to achieve certain effects - not sure that will apply on this model, but I'll point it out if it does! 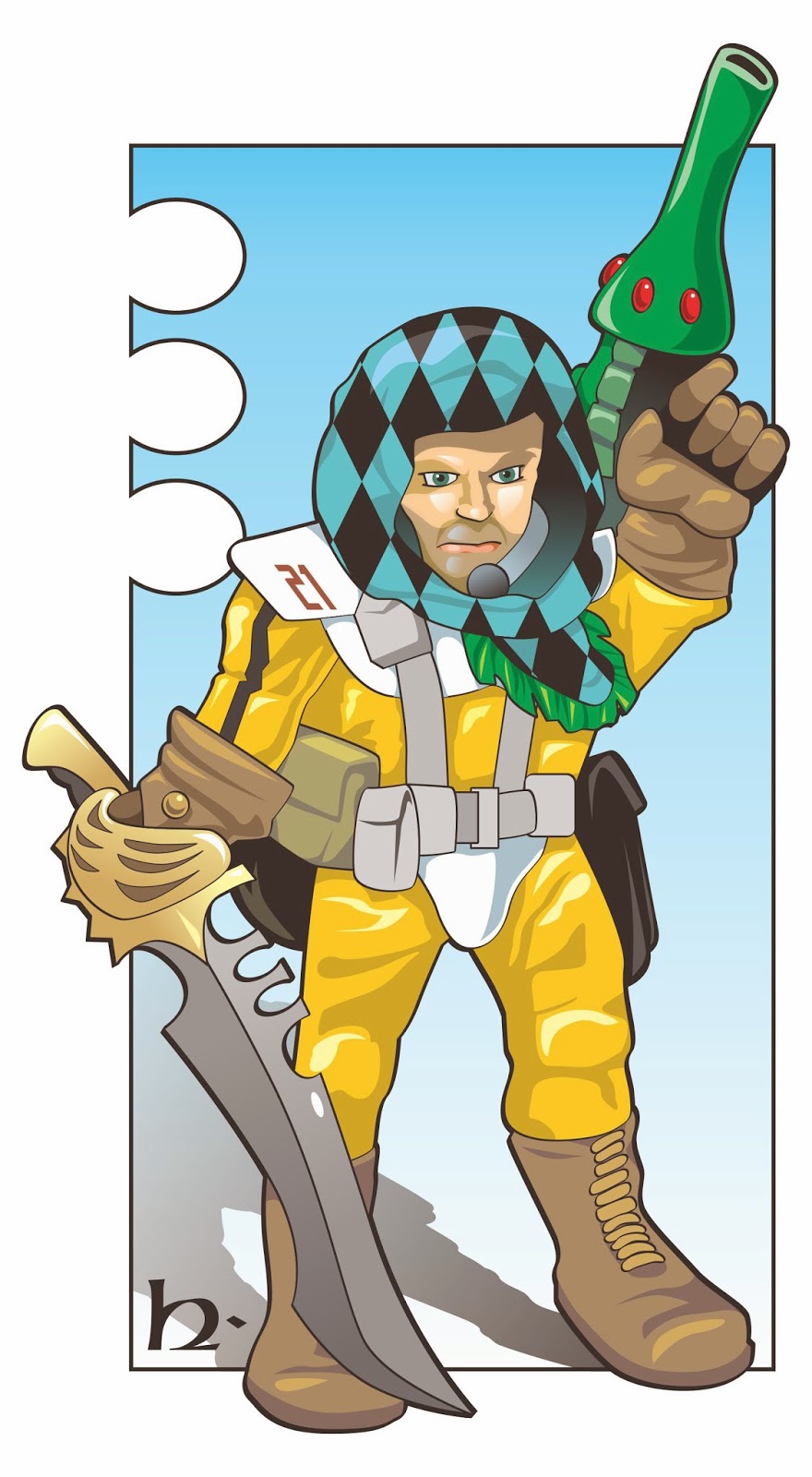 Now then, I don't have much in way of requirements for this model except that it needs some turquoise to tie it into the rest of the warband. Other than that, the color scheme is wide open. Without having my palette set out for me (as I would if I were painting Ultramarines, for example) I have access to my whole range of paint. It can be intimidating getting started with such a model so I decided to throw together a sketch to try out some different color schemes.

Keeping in mind that this model will actually contain two figures and the second is a Jokaero - who DOES come with a standard color scheme - I need to make sure they don't clash. The scout looks like he's wearing a pair of astronaut style coveralls and the get up puts me in mind of an x-wing pilot so my initial thought was to paint this orange. However, my Jokaero has orange fur and I don't want them to blend together, so I dialed the suit back to gold. The turquoise is going on the head scarf and will also carry a pattern in black (though not necessarily the diamond one from the sketch - I'll work that out when I get there). Many of the Eldar in the Rogue Trader book have green weapons and I thought that looked cool so I'm going to paint the shuriken pistol like those. I'll pick out the fringe on the scarf with the same color to draw it farther onto the model. The armor plates will be white and the rest of the gear will be various shades of grey, black, and brown.

When I paint rank and file models, I normally work on three to five at a time and paint each stage before moving on to the next (i.e. I paint all of the dark base colors, then do all of the washes, then the first highlight, etc.). I find this is faster and lets me crank out troops at a satisfying rate. However, on single models, I often concentrate on one area at a time and paint it to completion. I almost always start with the face and that is the case here... 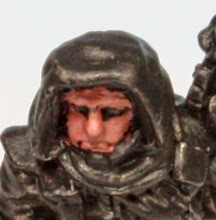 Bugman's Glow (Base) - I'm not trying to be super neat yet - I'll touch up areas at the end! I don't always paint eyes, because I think the model often looks more realistic with just shading, but Rogue Trader is over the top so I don't might a bit of comic book when painting them. 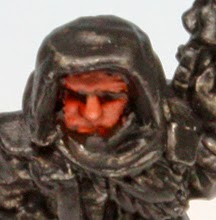 Reikland Fleshshade (Shade) - I pretty much just wash the entire area. Although it's not a concern in this area, you need to control the wash so it doesn't flood into other sections (especially if you've already painted them). 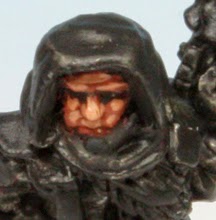 Cadian Fleshtone (Layer) - This step is what brings out the shape of the face and adds character. I want him to be a grizzled veteran so I've made sure there are some pronounced lines on his face. I left the lower lip in the base color. 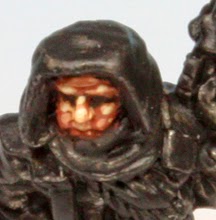 Kislev Flesh (Layer) - This step really makes the features seem three dimensional. I've just used it on the brow, nose, and cheeks. I left out the lower jaw to vaguely indicate a bit of unshaven whiskers. I would normally hit the forehead as well, but as this model is hooded, I left it in shadow. 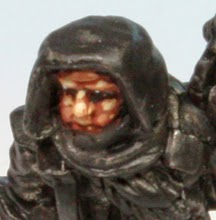 Flayed One Flesh (Edge) - Tiny dots on the tip and bridge of the nose and under the eyes - they don't show really well here, because these areas naturally reflect the lamps and the highlights almost appear to be there in the previous pic above. You can see them if you're holding the model. I also used this color to add small dots in the eyes - also hard to see in this photo.


I shudder to show my painting at this scale, but it is a necessary evil to be able to show a clear picture of each step. I would normally use Carrosburg Crimson to shade the lower lip, but in the case, the comlink unit almost completely covers it. I may go back in later and add a five o'clock shadow, but I need to get some of the details around the face painted to see if it's work it - it may not show well since the chin is covered.

Going forward, I probably won't show every stage of every piece of equipment (I'm not patient enough to take that many pics between coats), but I'll try to list all of the paints and I will point out where I deviate from my standard process. Please feel free to ask questions if you like... 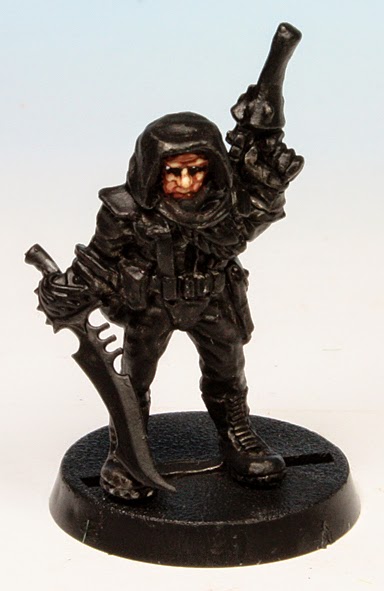