Close Combat
Again, for the most part close combat is similar to the other editions - roll to hit, roll to wound, roll to save. The declaration of the charge occurs in the movement phase and allows a double move, but it is interesting to note that the actually fighting comes after the shooting phase. A model being charged may Stand and Fire with a -1 to hit or Run Away at double their move speed. Targets with Slow weapons may not Stand and Fire.

What is really strange and makes this section a complete mess is the fact that models are treated as individuals rather than units! If a charge is declared, not all of the models in the unit need to charge. If they can maintain unit coherency (stay with 2" of at least one model in their unit), they can move at a normal pace and fire during the shooting phase. The target of the charge may elect to have some models run away while others stand and fire! If a charger's target flees, he may continue to move and attempt to reach another model. Units defeated in close combat are pushed back 2" and winners will follow up unless they pass a leadership test not to do so. Interestingly, models involved in that combat who kill their target, do NOT follow up and stay where they were. There is a relatively long section on resolving the fate and position of these scattered models. Again, not awful for a skirmish game with 10-20 models per side, but I must say I do prefer the close combat rules of 7th edition to 1st. When I get around to playing some games, I will probably need to house rule how some of these things are handled. 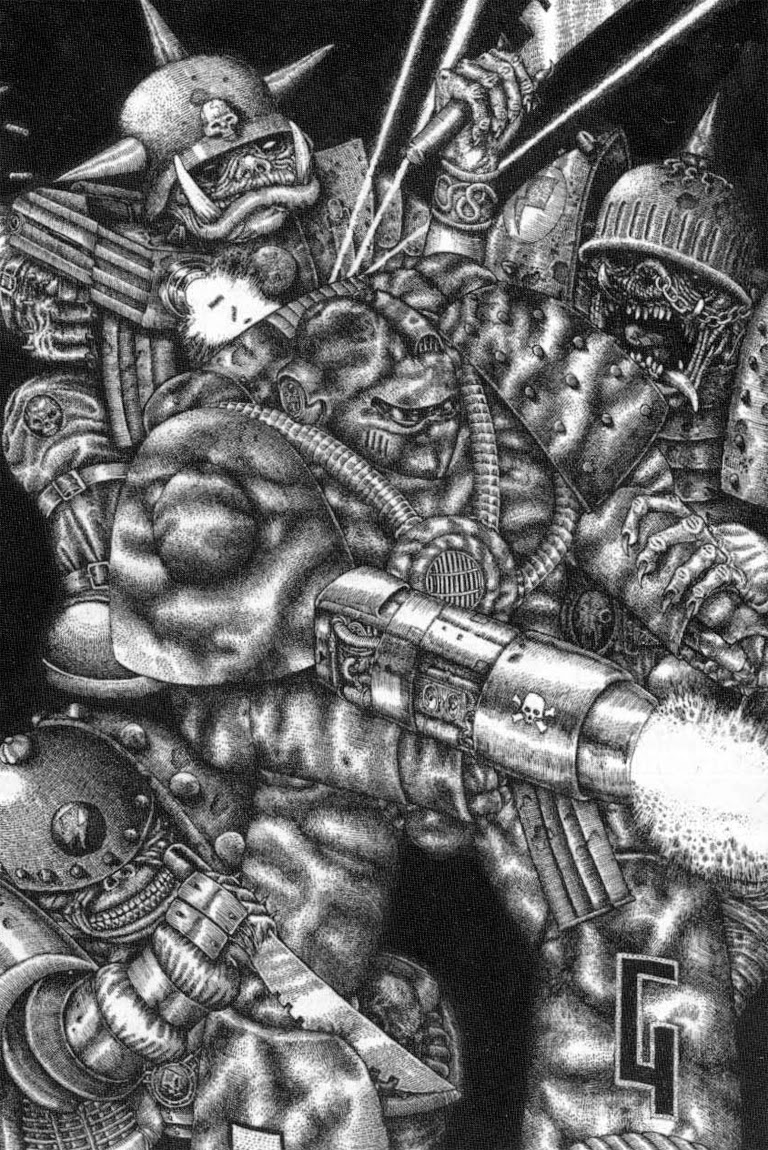 Combat is resolved in order of initiative. As with Shooting there are more modifiers than newer versions: +1 to hit if charging, +1 to hit if uphill (higher ground, stairs, rampart), -1 to hit crossing a defended obstacle, etc.

A specific pair of modifiers deserves a closer look. There is a -1 to hit if using more than one weapon and an additional -1 to hit for the weapon in the off hand. However, models with two weapons DOUBLE their number of attacks so a character with 2 attacks actually rolls four dice (-1 on the primary weapon and -2 on the secondary). Normally the more dice you roll the better, but it may be more advantageous to settle on a single weapon, especially considering the last little nugget...

... and I think is huge... even Weapon Skill requires a 5+ to hit rather than a 4+ as later editions. You are only 50/50 if your WS is one higher than your target. In general, it is harder to hit in close combat and again it may mean a higher rate of survivability and more models on the table during the later rounds of a game.