Shooting
As I mentioned covering movement last week, the facing of your models matters. In Rogue Trader, you have a 90-degree fire arc to the front of your model and cannot choose targets outside of that arc. Targets behind you are safe. Choosing the center of this arc can be problematic with some models and once again the book mentions that if there is doubt, the GM must decide if a target may be fired upon. As a simple rule of thumb, I make the center of the arc the direction a weapon is pointing. For models without firearms or weapons at ease, use the direction they are looking in. Line of sight is similar for the most part to the modern game which is basically the model's eye view, though woods block line of sight unless the target or shooter is within 2" of the edge, regardless of whether or not you can actually see models between the trees (remember these areas are representative and assume more trees and undergrowth than we can actually cram onto the base). 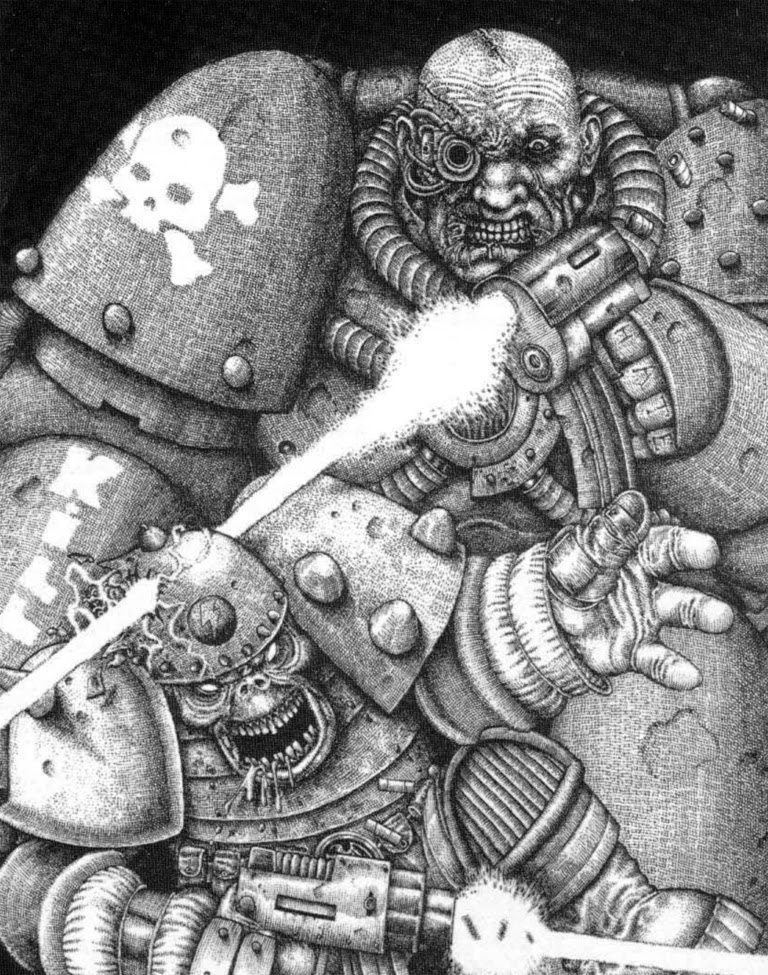 Something else missing from modern versions of the game is the ability to hide... not just go to ground for a cover save, but completely remove models from the danger of being fired upon (except by dropping templates on the area they are hiding in). The model must have some sort of cover - a wall, a building, a crater, etc. - and may not fire a weapon during it's turn or it will give away it's position. A hiding model may also not make a reserve move during it's turn.

Beyond these things, the familiar triad of roll to hit, roll to wound, and armour saves are pretty much the same with a few exceptions. There are more modifiers to hit (+1 to hit large targets over 3m high, -1 to hit small creatures under 30cm, -1 firing from a moving surface, -1 to hit target per 10" of movement last turn, etc.), including specific weapon mods for range...

Another mod that stands is a -1 to hit if wounded, so multi-wound character models will find their effectiveness reduced after taking their first wound. There is also a -1 to hit when throwing 'stones, bricks, pottery and other impromtu missiles'. I don't know what I like more - the vision of an Inquisitor lobbing a potted plant at a foe or the use of 'impromtu'. 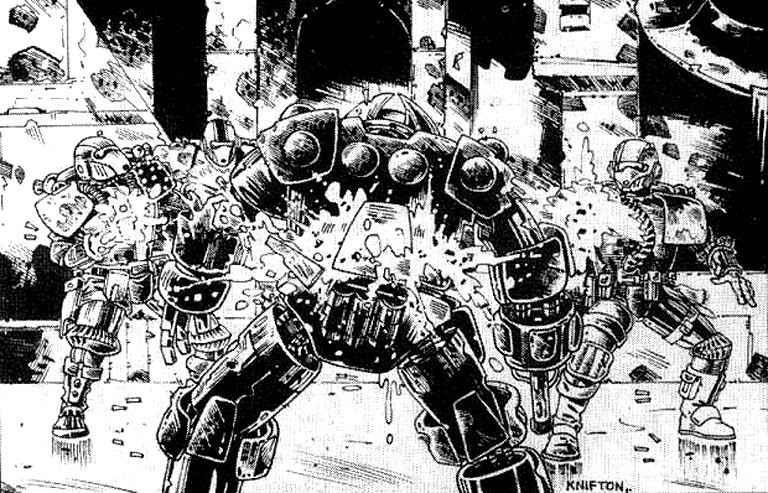 Also targets in cover are -1 to be hit in soft cover and -2 to be hit in hard cover rather than the modern cover save.

I think the modifiers may increase survivabilty of models, at least long range, which might be different from the modern game where armies seem decimated by turn three and the end of the game sees a dozen figures left per side. The number of modifiers doesn't seem prohibitive even for larger games.

Tales From the Maelstrom
As an aside, Andy Hoare from Tales of the Maelstrom has a great interview with Rick Priestly that touches on many points regarding the presence of a GM in games of Warhammer 40k. If you haven't read it you should go do it now (Quick! Run!). Besides being a great read, it may put some of my rambling into perspective for those who aren't as familiar with what I'm on about. Besides the interview, there are lots of posts on the site very much within the spirit of what I'm doing with my own collection and it's well worth some of your web time!
at 12:30 AM