Really pleased with how this unit turned out!

For the scale of games I intend to play, this squad would probably be plenty with the addition of a couple of low-level characters and a support vehicle or two (my rhino and landspeeder), but I will probably paint up at least five more so I can play Battle at the Farm. Hell, then I'm half way, I may as well finish the second squad...

I also have an assault squad (the old foot-slogging type with chainswords and without jump packs) and some terminators if I really want to let things get out of hand!

EDIT for Leadhead (previously posted on Quindia Studios blog, but I was remiss for not adding it here, so thanks for asking the question): All of my models start with a black undercoat. All of the paints were from the new Games Workshop range. I painted the armor with Macragge Blue, leaving the black showing in the recesses between plates. Then the model was given a wash of Drakenhof Nightshade. The next step was the most time consuming, though not nearly as much so on the modern marine models. I painted all of the armor plates again with Altdorf Guard Blue and left the darker colors showing in shadow areas - the underside of the legs and arms, around obvious joins int he armor, etc. In large flat areas, this meant blending the color out, but in small areas I simply left a fine line of the darker color showing. The final highlights were fast and consisted of Calgar Blue painted on the sharp edges of the armor (seen best on the helmet above).

Other colors were far simplier and applied in only two layers - Leadbelcher and tiny highlights of Runefang Steel for the metallics, Mephiston Red and Evil Sunz Scarlet for the visor (with tiny dots of White Scar and a coat of 'Ardcoat Vanrnish to make 'em shiny), and Celestra Grey and Ulthuan Grey for the white details such as the stripe on the helmet and studs on the shoulder pad. I don't remember what the browns for the pouches were, but any earthy color will do. 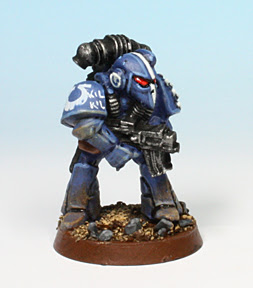 The classic artwork is filled with images of individualized embellishments to the Space Marine armor. In fact, in the Chapter Approved painting section (Battle Colours)  this is canonized by the story of Jon Blanchisan which relates 'the need for personalized iconography on all forms of armour and equipment.' I intend to take full advantage of that with these models and the model above sports a 'KIL KIL' slogan on his shoulder pad, a popular addition among the Adeptus Astartes.

The decals are from generations of Space Marine kits. I wanted to vary the look to keep a sense of individualism.

The battle damage was done by adding small chips and cracks with Abaddon Black and highlighting the underside of each with Lothern Blue. The mud and dust was built up by stippling and drybrushing in two coats, first with Mournfang Brown and then very lightly with Karak Stone, but you should use the same colors you would normally use on the base of your models. These colors are focused primarily on the feet and lower legs, but the errant splash here and there (such as the shoulder guard above) is not out of place.

Actually, I'm really not concerned with point values, army lists, 'correct' squad compositions, etc. My goal for this project is long term and simply to build up my collection of Rogue Trader models painted to the best of my ability. Unlike my Warhammer Fantasy project, I'm more interested in variety than saying I can field x number of points. I already have a pile of Adventurers, Orks, Chaos Renegades, and Genestealers waiting to be painted. I also have a small group of Eldar (enough models to make a couple of squads from the Crab Nebula Pirate list from the Book of the Astonomicon) and a squad of Squats that can either be Imperial Guard or part of a Rogue Trader retinue. I want to get a few of the rarer things as well like Zoats and (original) Tyranids. I doubt any of these will rise to the level of 2000-point armies, but I will happily mix Imperials against devious alliances of aliens until my forces are strong enough.