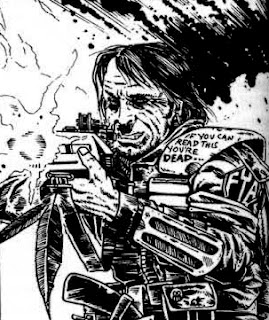 Seems to be difficult to keep these regular, but I'm on a bit of a RT kick so hopefully I can manage to be more consistent.

Following the intro to equipment from Part Twelve, let's start looking at weapons! Again, I'm not covering every blade and barrel, but there are some things I want to highlight. There is a surprising bit of fluff tucked away at the beginning of this chapter that wonderfully illustrates the character of the Rogue Trader setting.

We've already mentioned in the introduction that ranges and effects have been deliberately kept low to make the game playable. Some people find this very hard to accept. Try to remember that the universe of the future is very different than that of today, brute force and fear are the most potent of all weapons. The hand to hand fighting reputation of a unit may be in itself sufficient to put down a rebellion! Technology and sophisticated weapon systems have no place in this universe. Equipment must work and, where possible, be easy to manufacture on worlds where the only building materials are wood, stone, and metal ores. Try to remember too that a weapon's combat effectiveness is measured in terms of durability and ease of production as much as its theoretical performance - hence the relatively low powered laser is the most common weapon.

There are optional rules included to extend ranges up to ten times for those who desire more 'realistic' weapon ranges. Firing at these ranges first requires the roll of a '6', followed by a normal roll to hit and weapons strengths are reduced by one. Again, probably a bit of complexity not needed in a wargame... 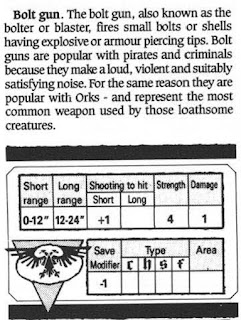 Many of the weapons presented have similar stats to the ones that followed in later editions. For example, the Bolt Gun has a short range of up to 12", long range of up to 24", and a Strength of 4. In addition, it has a +1 to hit at short range. Many ranged weapons have modifiers to define their accuracy at short and long ranges. Weapons also have an armour save modifier that was independent of the weapon's strength, similar to AP of the modern version of the game. They are divided into mostly familiar categories - Basic Weapons, Close Combat Weapons, Heavy Weapons, etc. - though there is one category of Very Heavy Weapons that probably equates to the D-Weapons or Apocalypse level armament of the modern game.

Something else that hearkens back to RPGs of the day and completely absent from most modern wargames are random generation weapon tables. While it is more likely that any random weapons I include in a game will have to do with the models I have on hand (if I don't have a model with a plasma cannon, there won't be on the table), I find these tables interesting because they are weighted to the availability of the weapons. For example, looking at Basic Weapons, Auto-guns make up 25% of available rifle-style weapons, making them much more common than they would be in later editions. Lasguns come in at 18% with Bolt Guns, Plasma Guns, and Shuriken Catapults (they were not just for shiny Eldar in Rogue Trader) both at 10 %. The rest of the Basic Weapons are rated 5% each. The chart also includes bows, crossbows, and muskets, but rather than assign percentages, they have marked them with my favorite "GM Decides" tag.