The Battle at the Farm is among the most famous scenarios in Warhammer 40k lore. A quick Google Search will reveal numerous online battle reports. The game is set on Rynns World and finds the remnants of a small Crimson Fist detachment hunkered down in a burned out farm as a force of Orks makes it's way through the valley, apparently searching for something.

By all accounts (somehow I have never gotten around to running this scenario despite having modern versions of both Crimson Fists and Orks in my collection), the game is heavily weighted on the side of the Space Marines (in the neighborhood of 440 points to 210!). It should be noted that the Orks are trying to recover a hidden treasure in the farm house and it is not necessary for them to kill all of the Marines to win. The Marines may also be placed under some pressure not to sit around in the farm once the shooting starts (see below).

Putting that aside, this chapter again serves to highlight a HUGE difference between Rogue Trader and the modern game of Warhammer 40k. It is assumed that the scenario is central to the experience, not something simply tacked on to set the stage for two 'bring and bash' forces. 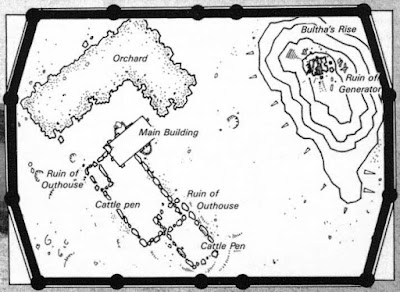 Player Briefs
Before every game the gamemaster should prepare a written brief for each player and one for himself too. Each player's brief contains all the information the player would know if he were the commander on the spot - so all the GM needs to do is present the players with their own brief and allow the to read it. A brief contains a description of the background to the scenario, a run down of the situation represented by the battle,profiles for the player's own troops, details of weapons, equipment, and objectives for the game. Having a written brief allows the player to keep and accurate check of his forces, and makes it unnecessary for the GM to keep explaining important details. The brief also makes it easy for each player to keep his own details and objectives confidential, for this reason it is important that players see only their own brief.

There is no reason why a player's brief can't contain deliberately misleading or wrong information!

Forces and Disposition
The Space Marines are led by Commander Pedro Cantor. He has fifteen Space Marine Brothers under his command, one of whom is armed with a Missile Launcher. They begin the game hidden in the farm, with no models on the table - their positions are marked on the map and are revealed when they move or fire.

The Orks are led by Thrugg Bullneck. He has twenty Orks, including a champion squad leader called Hrug. They enter the board from anywhere on the eastern edge.

Victory Conditions
The Space Marines must slay all of their opponents to prevent them from informing other Orks to their presence. Thrugg and Hruk are only interested in their treasure (hidden among the ruins during a previous patrol). To recover this they must spend 1 entire game turn alone in the main building - stuffing the jewels into their pockets and packs. Alternately, one of them can recover the loot in 2 turns. To win the game the Ork player must recover the jewels and either Hruk or Thrugg must survive. If the Ork player elects to communicate the Marines' whereabouts and succeeds (Thrugg has a communicator and must roll 6+ to contact his Boss) he will be ordered to stand back and await reinforcements. Once he has done this, the Marines have 4+D6 turns (presumably they intercept the transmission) in which to leave the table by the eastern edge. Any troops failing to do this are caught by an overwhelmingly superior force of Orks and slain automatically. Once the time limit is up Thrugg has blown his chance of recovering the jewels - the Ork in charge of the relief force decides to build a parking lot on the site!

Victory points are presented as an optional rule, though the text mentions 'They make no difference to the game'. They are offered as a way to determine victory if the game can only run for a set length of time and players are unable to finish. 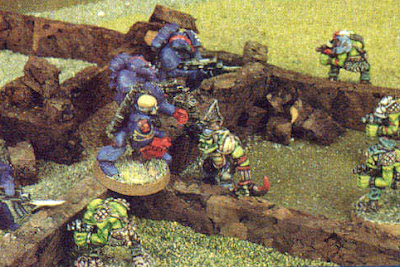 I'm going to have to put this on my list. I'll probably use Ultramarines since I already have ten of them painted and I have plenty of unpainted Rogue Trader era Orks. I have a couple of friends I'm pretty sure are unfamiliar with the details of this scenario now and that is really the best way to run this game. The Orks might have a chance with the fog of war, even at a 2:1 point disadvantage.
at 12:30 AM 3 comments: 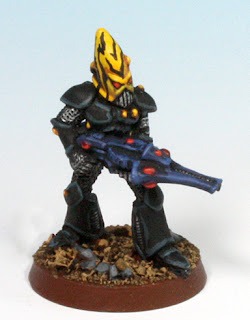 Eldar Pirate with a Missile Launcher! 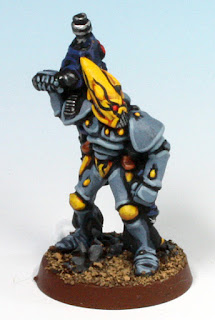 I should mention rather than paint every model in the same color scheme, I am going to vary the armour color and use all of the schemes from the Rogue Trader book. The fluff states Eldar Pirates don't wear uniforms and many of the photos have mixed schemes. The yellow helmets will tie the models together... 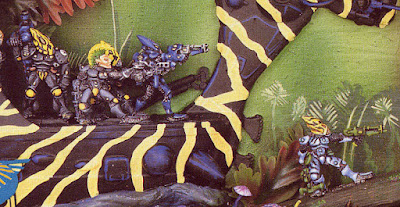 I have enough old school lead to make two Lightning Sqauds, one Thunder Squad, a Harlequin Troupe (from White Dwarf, not the old Pirate list), and a handful of characters. I also have an old War Walker around here somewhere.
at 12:30 AM 4 comments:

It is premature to say I am 'back', but I do feel like it is time to move forward. I want to thank everyone for the kind comments on my blogs, the prayers, and the support. Life will never be the same, but I do find some comfort in keeping busy and I have not been idle, though I have lost my train of thought. 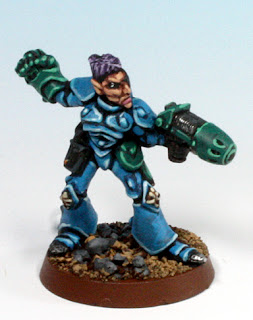 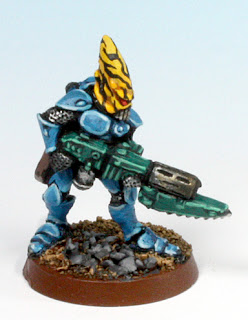 These Eldar Pirates are the first of ten. I really just wanted to paint something different and the Eldar were some of Sara's favorite.

I also started a new blog for Age of Sigmar. I really happen to like the game for a host of reasons, though it doesn't mean I've abandoned Oldhammer (all of my AoS games so far have been with my 3rd Edition Oldhammer armies).

I don't know that I will maintain the same pace I once had on this site, at least not for a while, but I did want to get back on. I'll try to get back to my Reading Rogue Trader series as well, though it's been a while since I cracked that tome.

Thanks again for the support.