The next section of the equipment chapter is dedicated to grenades and missiles. Grenades are treated as ranged weapons in Rogue Trader and each has short and long ranges listed for thrown weapons (normally 4 and 8"). Grenade Throwers and Missiles are ranged per the launcher but there is a quirky fourth option - the sling. This primitive weapon may be used to lob grenades, but the rules are unclear. Under the sling it says the range listed is for normal stones, but in grenades it says ranges for weapon launched grenades under the appropriate weapon. Maybe there is another entry somewhere, but I didn't see it...

There are twenty-one different types of grenades that fall into three basic types:

Blast - Just what it sounds like - they explode.
Gas - Poison and chemical agents - the reason there is gear like respirators and the like, though some gases may be absorbed through the skin unless the target is in a fully sealed suit.
Field Effect - Energy field that causes localized disruption of various kinds.

Grenades are also all Slow weapons, meaning they are move or fire. May as well hit all of the grenades, though I'm not going to cover all of the stats. All of these are also available as missiles. 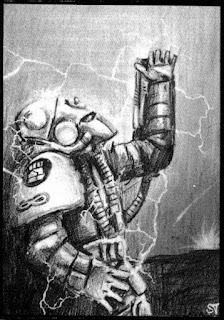 Anti-plant - How cool is that? The GM is instructed to remove appropriate scenery within the effected area, though this is only a 3" diameter. Depending on how your scenery is based, this may be hard to implement on the table. However, if you have a unit with these weapons you could probably remove a standard-sized terrain piece. Anyway, it would be interesting in some scenarios.
Blind - Pretty much an improved smoke grenade that blocks line of sight and psyker abilities.
Choke Gas - Lethal cloud that causes damage and may be ignored by models with respirators.
Crack - Devastating to armoured targets, but with half the range of most other grenades.
Frag - The humble anti-personnel grenade you know and love, though you may not expect to have a 3" radius template.
Hallucinogen Gas - Oh, this is fun. The targets suffer effects from a d10 chart. Example: You're sure you felt something drop onto your head! What is that tickling you neck? It feels like a spider... spiders... hundreds of 'em! Tear off all your clothing, discard all equipment and scratch. The model is totally immobilized and inactive until the next turn, and must then be rolled for again if it remains within the gas.
Haywire - These cause damage against living creatures (albeit with a STR2) but can be devastating to gear and vehicles. Roll a d10 - All technical equipment with a tech level higher than the number rolled is rendered inoperative. Vehicles get a save equal to it's basic armor.
Knock-out Gas - Nite, nite! When the gas dissipates models may recover on a 5+ on a d6.
Melta-Bomb - Pretty much what you'd expect, melting most targets into goo.
Photon - A brilliant flash that renders targets blind and destroys light sensitive equipment such as targeters and infra-red vision devices. Blinded creatures may recover their sight within d6 DAYS! Models affected are considered unconscious and may be removed from play at the GM's discretion. This is the reason many models have protective visors as standard equipment!
Plasma - Yet another death dealing heat weapon, this time in the form of a boiling cloud. It begins at 3" diameter and shrink 1" per turn, possibly drifting across the field.
Psyk-out - Basically causes d6 psi-point damage and the permanent loss of one psychic level to psykers. In addition, any psychic powers employed in the area are immediately cancelled.
Rad - Creates a radiation hot-spot that remains in place for the rest of the game. Roll (d6
+d4)/2 to establish the radius of the zone. Models passing through this area take an automatic hit with a Strength equal to the radiation level.
Scare Gas - Gas cloud that causes targets to test for fear.
Smoke - The humble version of line of sight blocking grenades. Troops may not fire through smoke unless they have infra-vision gear.
Stasis - Disrupts TIME, creating a field that weapons may not fire through and freezing models in the field. The effect lasts until the field disperses.
Stumm Gas - Causes Confusion.
Tanglefoot - Gravitoic distruption that causes half movement and a -1 to hit for troops firing into or out of the field.
Toxin Gas - No save, target is dead. One of the gas weapons that defeats respirators as contact with the skin is just as deadly.
Virus - Again targets hit are killed, but the virus may spread - roll to hit to other models within d6". This continues indefinitely until there are no targets within range or no hits on the follow up! The last sentence is fun - Although the effects of the virus are assumed to only last one turn, in fact there is a 1% chance of all uses it will break out again at random moment within the next 10 years.
Vortex - Basically a mini-black hole that destroys everything it touches. It is much harder to accurately aim, harder to dissipate (it may even split into two!), and seems to be frightening for both sides. 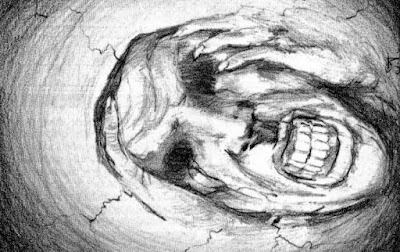 Whew! Finally, any of these weapons might also be found as mines. These devices are 'mico-mines', usually laid in clusters or scattered groups. Finding them is almost impossible - except by accident or use of any energy scanner, though with the latter, there is still a chance of being hit on a 6 on a d6 as the range is quite short. The GM is responsible for knowing where the mines are planted as they are not normally marked on the table unless they are to act as deterrents by those who place them (barbed wire, signs marking the minefields, etc).

I don't know that I would use some of these, but my games tend toward basic and close combat weapons. I would consider including a few of the stranger on a limited basis or to fit with a scenario.

Next time we're going to look at one more type of destructive equipment - Support Weapons - it may not be what you think...
at 12:30 AM No comments: 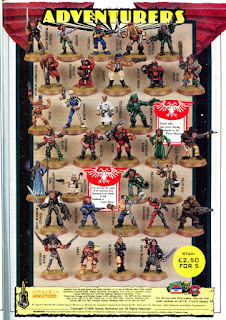 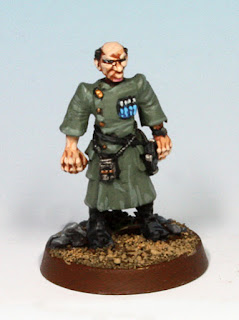 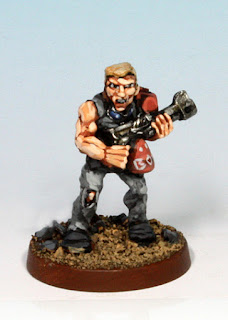 Obviously many more to come as well as mixing in other models from era!
at 3:44 PM 3 comments:

A bit more on weapons...

There are four weapon 'types'
C - Close Combat - Yes, you can use these in hand to hand. Examples: Auto-pistol, Chainsword.
H - Heavy - The weapon imposes a movement penalty listed in it's profile. Examples: Heavy Bolter (1" penalty), Las-cannon (2" penalty).
S - Slow - These are the familiar 'move or fire' weapons. Slow weapons may however be fired from a moving vehicle as long as the crew is stationary within the vehicle. Examples: Melta-Gun, Missile Launcher.
F - Following Fire - If you cause a wound with this weapon (even if it is saved) you get to roll to hit again, either against the same target or against another target within 4". Examples: Plasma Gun, Shuriken Catapult.

A few random notes...
- Auto-guns and Lasguns have the same stats, except that Auto-guns have a range of up to 32" compared to the pedestrian 24" range of the Lasgun.
- Bows could be equipped with explosive arrows that made them the equivalent of Bolt Guns...
- Graviton Gun... yep, this is where it was before every Space Marine in the new edition started carrying one. However, it didn't cause damage. Instead it gave the target a D6" penalty to movement FOR THE REST OF THE GAME. If the target's movement is reduced to zero, the target is pinned to the ground and can take no physical action. Note there is no save of any kind allowed!
- From the entry on the Musket: A primitive weapon, still used on some feral and backward planets, of which Birmingham is the most well known (Birmingham - aka The Black Planet - receives almost no visible light and as a result no-one wants to go there. Its inhabitants have become linguistically and culturally isolated). Have I mentioned how much I love this book?
- Shotgun has Scatter, Solid, and Gas round options.
- Shuriken Catapults have a 0-12"/12-24" range, +1 to hit at close range, S4, a -2 Armour Save mod, and Following Fire. Scary!
- Pistol ranges tend to run up to 16" and most have a +2 to hit at close range, making them much more useful than the modern versions.
- Plasma weapons do not suffer from the Gets Hot! rule, but must recharge between shots and can only fire every other turn.
- Power Swords are S5 (most close combat weapons use the strength of the wielder) and -1 armour save.
- Power Gloves are S8, -5 armour save, and do NOT strike last!

Next time we're going to look at grenades and missiles of which there were a far greater variety (and some great entertainment value) than today.
at 12:30 AM 3 comments:

It's been a long time since I've been able to turn my attention to Last Stand at Brandon's Star IV. I'm RT mode right now, so I'm going to run with it as long as I have the urge. Part of the defenders in the scenario come from the ranks of the Adeptus Mechanicus... 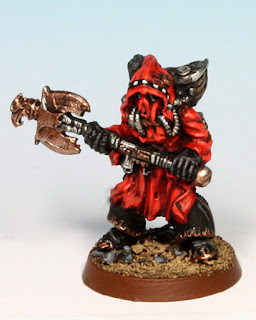 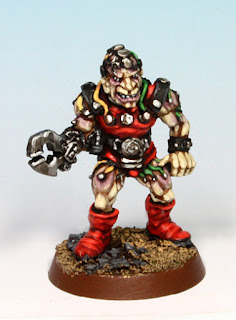 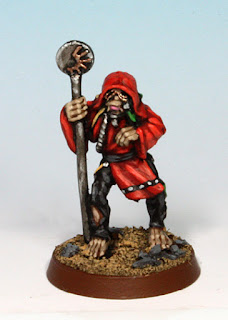 The servitor looks positively demented. I have another servitor stewing in a stripper tub (man, that sounds like more fun than it actually is) and a squad of five Confrontation Tech Gangers that will serve as Skitarii. As the Tech Priest appear to be unarmed, I'm going to equip his staff with a shield generator of some sort to lend protection to all models within 6".
at 12:30 AM 5 comments:

Ok, so not looking like a Goliath didn't go so well... 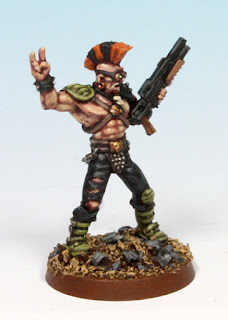 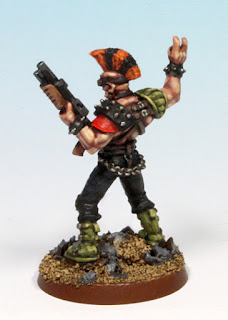 My original plan was to paint his skin in some sort of color pattern, but with all of the belts and straps the pattern I had in mind wasn't reading well. In the end I settled on a normal skin and concentrated on picking out the wealth of detail on the model.

Psycho Sam was fun to paint and I have no doubt he will be lending his shotgun in support on one side or the other of an upcoming Rogue Trader game.