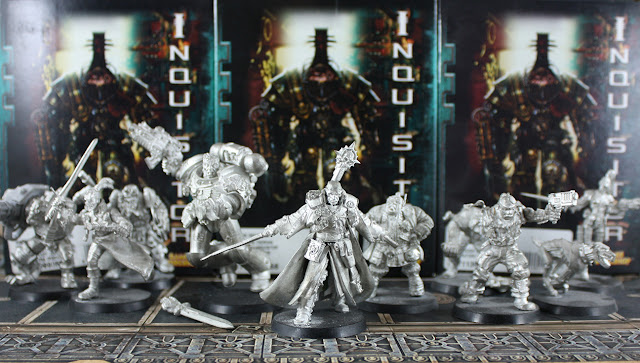 I actually didn't realize I had this many models assembled until I started dragging them out of the cupboard. Let's see - Gregor Eisenhorne, Death Watch Space Marine, Rogue Trader, Callidus Assassin, Cyber Mastiff, some sort of smary ship captain and two deck hands, another mutant, and the second combat servitor I mentioned a few weeks ago.

Those three boxes in the background are an Eldar Ranger, a Thorian Inquisitor (kind of a Boba Fett looking helmet), and a female Inquisitor named Lady Jena Orechiel. There are some kits that I never built 'as is' like the Imperial Guard guy and Cultist with the chainsword, but I used the bits for other models. There were a few kits I didn't have, but I'm going to have to look into this now... I have a feeling my OCD is about to kick in. I haven't dug into this box, but I see six pairs of legs, so I'm betting I can get at least four models out of this stuff (one is another death cult assassin), plus a Reaper Miniatures 54mm gun chick of some sort and a weird bald little mutant.