My initial intention was to use Citadel's old Judge Dredd line for my Adeptus Arbites. However, when I dug them out of the cave they have languished in for decades, I discovered they were waaaay to small to go with the rest of the models. They are nearer true 25mm and while I'm not completely hung up on small differences in scale, these models were a head shorter than most of the others - not something to inspire fear among the citizenry!

Undeterred, I dug through my collection and found these Citadel Paranoia Security Guards and decided they would do nicely. I wish they made more of these. I may get a second set and try a little more drastic conversion work to build them from a 'team' to a 'squad'. I might also look at Warlord's Judge Dredd line - the sculpting seems to have a certain Rogue Trader charm, but again I'd have to see about how they fit in scalewise (anyone have some of these?). I managed a few quick weapon swaps with Bolt Pistols and a Plasma Gun to seat them more firmly in the Rogue Trader universe. 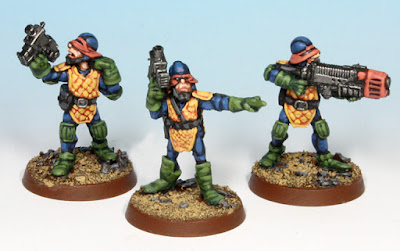 I chose to paint them in a scheme inspired by Judge Dredd rather than the more modern black and white. To tone down the garish combination a bit, I chose a green that had more of a blue tone and substituted a more earthy terracotta for the red. I am well pleased with the results and they should look great on the table! Their armour should give them a little more staying power than the average rebel model... 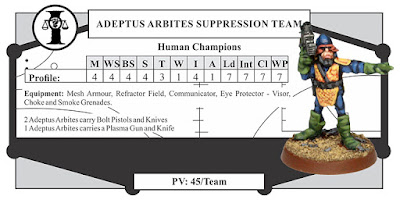 The Imperial force is taking shape. The models I've collected so far...

The Imperials will also have several scribes and administrators that will probably be of little use in combat, but may serve as shields for the Astropath! I intend to work out a rough point total and then work out the rebels. They outnumber the Imperials three to one, but are mostly standard humans. If I need to add models to the Imperials, I can always pull Marko Steelknife and his crew out for reinforcements!
at 12:30 AM 6 comments:

I finally got around to painting a few models for my next Rogue Trader Scenario, Last Stand at Brandon's Star IV.

First up is the Astropath around whom the game centers, Malconius Bell... 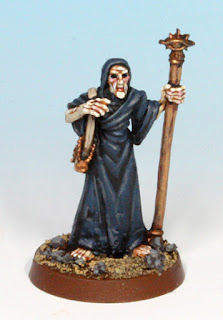 I think I spent all of an hour painting this guy, I used Wargames Foundry Boneyard for his skin with a wash of GW Carroburg Crimson under the eyes to give him an unhealthy pallor. Originally I painted the eyes as normal, but he looked much more haunted and haunting with black pools of the warp staring out from his face so I went back and painted out the whites. The sculpted eye sockets are so deep it was hard to get them to look right anyway so I think was better.

I chose to make him a minor hero so he wasn't too much of a badass. I mainly need him sending the alarm through the warp, but his psychic abilities may be necessary for defense as well. 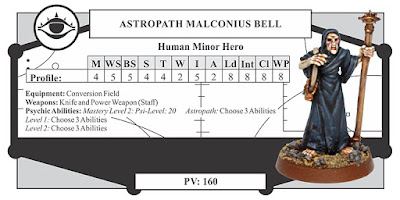 Like many among the Oldhammer community, I've taken a liking to Frostgrave which has a very retro D&D feel to me. I posted these oldschool style roster sheets a while back on my Quindia Studios blog, but thought I might post them here for those who may not frequent my other site... 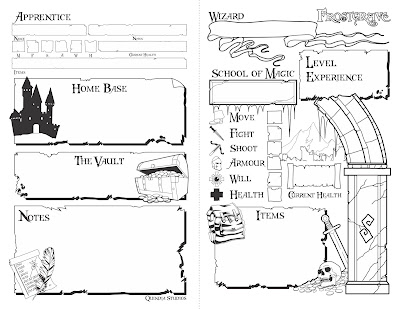 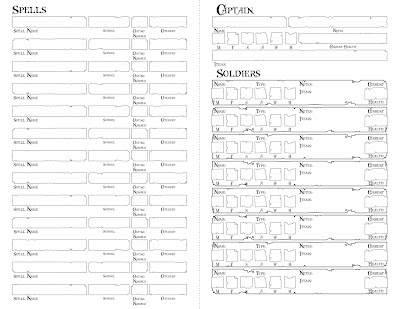 They are designed to be printed double sided and folded in half. There is also a version in French... 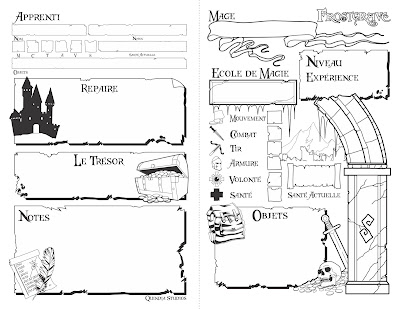 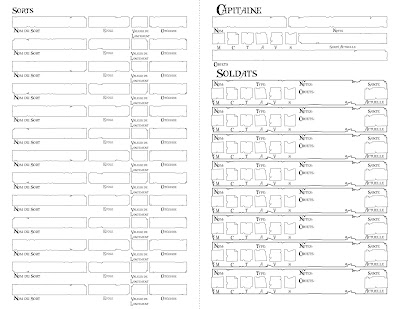 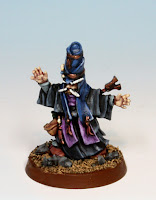 My current warband led by his most awful majesty Madcap Toddlekin and is made from a mix of Reaper, Wargames Foundry, and Frostgrave models. I started with an apprentice named Kip, a barbarian called Urich, a thief named Raker, two crossbowmen, and four thugs. My first game saw Madcap rise to second level, earned the moniker 'Nine-Toes' for Kip, saw one of my crossbowmen taken out of action for the next game, and buried one of my thugs. I earned enough coin to replace the goon with a dead hard Captain named Bornad the Archer. So far I've only played one game as part of a campaign, but it was a lot of fun and we have the next round planned soon. I am also collecting a proper Oldhammer warband from vintage Citadel models as well. More on that in the future...
at 1:08 PM 1 comment: