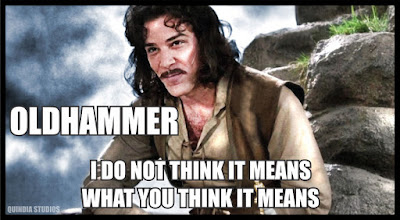 They really have no clue over at Bell of Lost Souls if your game doesn't involve trying to melt the face off your opponent with your ridiculous army build before the dice even start rolling...

The funniest part to me is this:

You may have heard this term bandied about quite a bit during the whole birth of Age of Sigmar. Many people who thought negatively about the Age of Sigmar rules decided to just keep playing 8th edition Warhammer Fantasy Battles.

I really don't think the article is about Oldhammer at all and the author grabbed the term without knowing what it meant. Likely he 'heard this term bandied about', probably by those raging against Age of Sigmar.

The entire concept of the article is foreign to the concept of Oldhammer as it's been built by the community that coined the term...

In short: your game gets stale. The Power Curve gets stale, the codices get stale, the unit entries get stale. You lose all hope for a better codex. If you play the same edition and same codices for, let’s say ten years, the armies that were on top at the beginning will undoubtedly be on top at the end. There is a 0% chance that they will get any worse and that other armies will get any better. The game would almost become rock-paper-scissors after you’ve played enough games. When Army A fights Army B, the battle will probably go the same way it always did every game previous; generally speaking.

That description has ZERO to do with Oldhammer. I'm not going to go into what Oldhammer IS... I've posted this link before and you can go to The Realm of Zhu to read it if you are unfamiliar with what I'm on about.
at 5:25 PM 12 comments:

Email ThisBlogThis!Share to TwitterShare to FacebookShare to Pinterest
Labels: Oldhammer

Delaney King is a Trans Woman who is also a well respected miniature painter, sculptor and works in computer graphics making some truly amazing models and designs (from quite a few big titles including Dragonage: Origins, Civ 4, LOTR Online). She has worked on developing computer model design coursework in this country in an attempt to raise the profile of Australian computer game design and appeared on industry panels at conferences.

This year she began transitioning, which together with it came a wave of transphobia from the nerd and geek community which is unacceptable in this era - especially from a community of which the chief focus is playing with toy soldiers. She is now resettled in Melbourne after moving from Canberra for work and split from her partner and one year old child who remain in Canberra.

She now finds herself struggling to stay afloat as described in her post. If you can help, Delaney is asking for donations to help her get on her feet in a new city. Share out to the wider nerd network if you can.

Delaney has chronicled her beginning stages of transitioning, separating with her partner and relocating to a new city together with some of the transphobia she has encountered. Her blog over the last year has been an interesting read if this is something you haven't known within your circles.