I really can't decide what to call this game. I suppose going forward, I'll start using Shadow War, but the publication of this book has sparked a return to multiple projects. For instance, this weekend I worked on a little terrain... 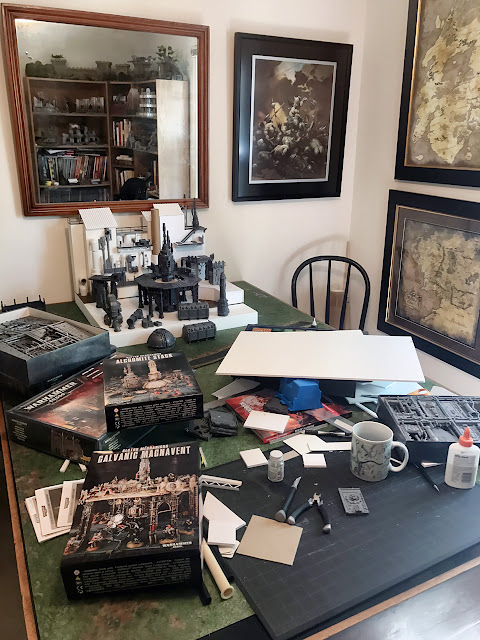 Forgive the photos in this post, they were taken with my phone. Still very much a WiP (see all those white and grey rectangles along the right hand side of the photo below? Those are doors that belong on the walls above there current locations). 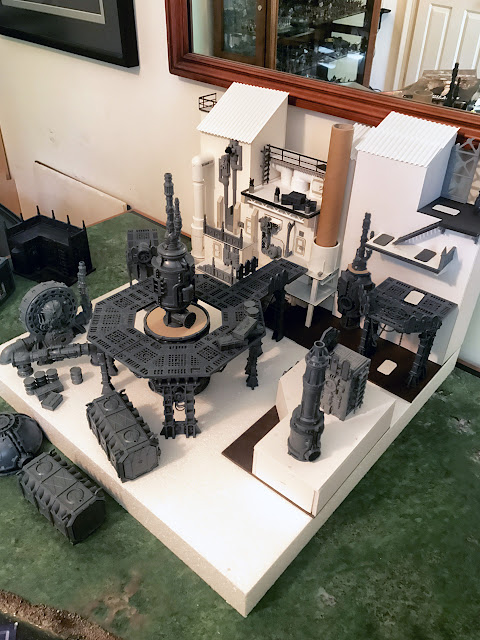 This project was actually something I started in 2001... 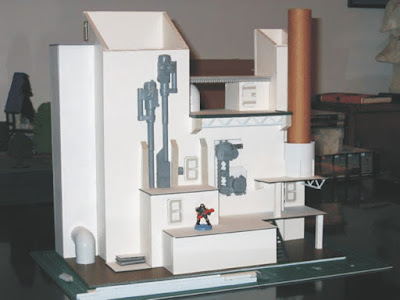 It was a table I was designing for Inquisitor, which I was planning on playing in 28mm (though I ended up buying and painting around 30 of 54mm models... maybe that deserves a post at some point). Aaaaaanyway, the launch of the game featured a battle report with an incredible backdrop factory that filled one whole table edge. As Inquisitor was designed to be played on a 4x4' table in 54mm, I launched a similar project for a 2x2' board.

I have the attention span of a four year old and followed the game into 54mm as I said and probably jumped from that to 40k or Mordheim or Napoleonics or... you get the idea. The model above was tucked away. I've actually returned to his project several times over the years, but never really got around to finishing it. Hell, I might not finish it this time, but at least the release of the industrial kits for Shadow War (and the looming release of 40k eighth edition, which is actually closer to the Rogue Trader rules than the game has been in decades... hmm, that sounds like a topic for another post) got me to pull out the half forgotten shells of project. I spent a couple of days happily carving up foam core, inhaling glue fumes, and generally making a mess across the entire top floor of my home as I rummaged through closets looking for that bit I just know I had tucked away (and leaving piles of stuff around the room as I dug through). 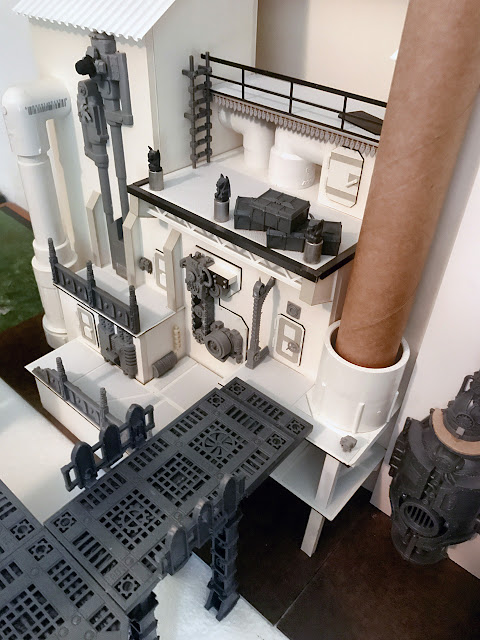 The board needs to be crowded for Inquisitor so this 2x2' board is packed and only needed room for 3-5 models per side to go at it, but all of the terrain will work equally well if I spread it out on a 4x4' or 4x6' table (and add it to my large collection of urban ruins and other 40k stuff). Heck, I've got three or four more of these new kits still in the cellophane! There's still a ton to do, but I thought I'd share a couple of WiP pics and get a cheap blog update out of all this work. 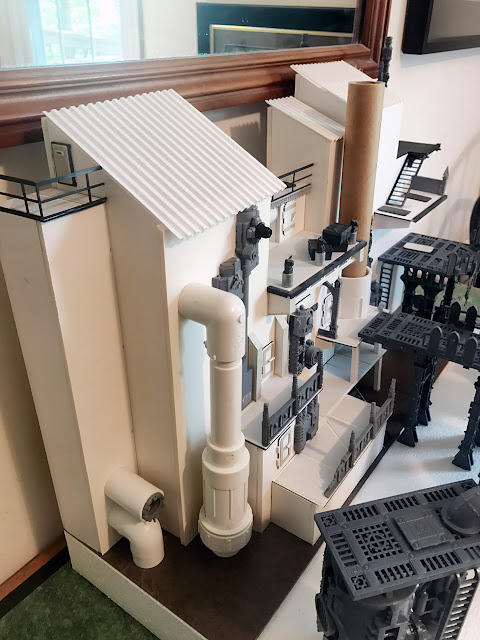 And that makes four with Aridruin Dreamthief, Troupe Master of the Troupe of the Shattered Spear... 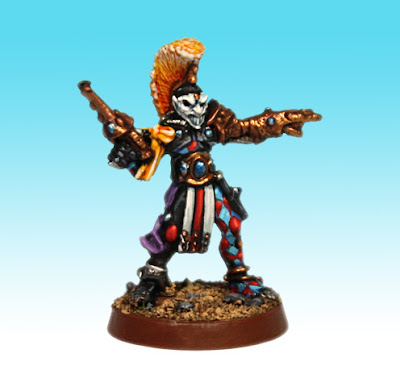 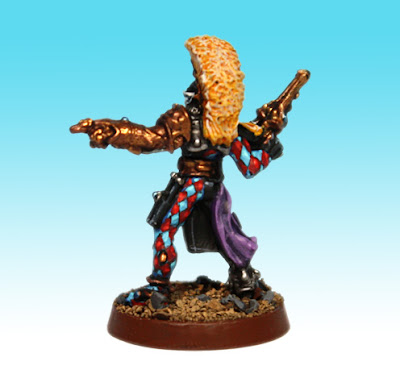 The power glove is suppose to represent a Harlequin's Caress. My original intention was to paint it with a ghostly glow around the hand, but I decided the model had enough going on already. It was really the only model I had without a sword or second pistol in hand.

A bit of the method to my madness when painting these guys and more going forward... I like the appeal of some uniformity in an army. While the old school Harlequins captured my imagination long ago, I wanted to tone down the riot just a bit. I also wanted to avoid the more uniform appearance of the newer GW studio versions.

What I ended up with is a compromise between the two. I've kept a somewhat limited palette, at least for Harlequins. The main unifying detail will be the white masks. All sashes and ribbons will either be yellow or purple. I've already discussed the plan with the relatively plain attire of the Mimes and higher level Harlequins will sport more familiar patterns. To tie together the fancier lads, each will bear at least some of the diamond pattern and all of these will be red and something else. These few choices will give the force a cohesive appearance while still allowing freedom to run a little wild.

I enjoyed painting these minis. I'm not sure if I'll paint more of these now or wait until the need arises in the campaign. I'd like to paint a few more for a proper troupe for Rogue Trader. Flipping through the Shadow War book I've found I can make Imperial Guard, Inquisition, and Eldar lists from Rogue Trader models I've already painted. I also have a hundred or so RT Orks tucked away and a Kill Team seems like a great way to paint up a few of these without the worry of needing all hundred guys for a game.

Two more members of my warband! 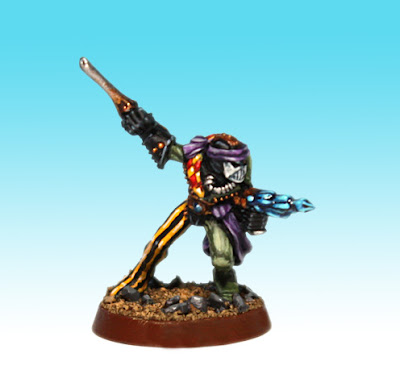 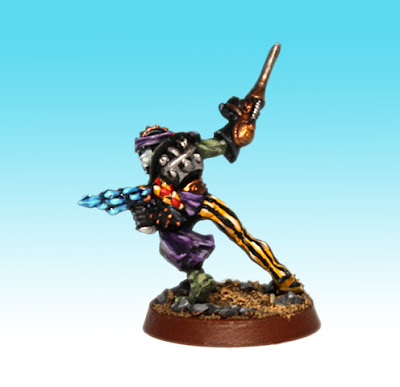 Galandrad, the second of my Harlequin Mimes... 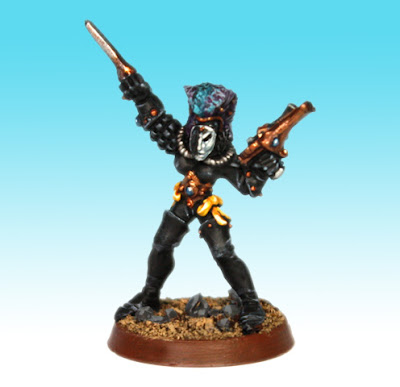 The Vituoso has a Neuro Disruptor and Harlequin's Kiss and Mime has a Shuriken Pistol and Harlequin's Kiss. Harlequins are expensive in Shadow War and some forces run into an issue where you don't have enough points left to buy another model and end up with more expensive gear that you might have otherwise chosen. The Kiss is probably overkill for a Mime, but what the hell...

All I have left for the starting kill team is my Troupe Master! I'm also going to paint a Death Jester to add some fire support in future games. I'll paint other models as I recruit them (or promote them in the case of Mimes).
at 12:40 PM 3 comments:

It's been a while since I've had anything in the vein of oldschool to post. I've been mostly concentrating on my 1690 historicals and I'm venturing into 1709 as well. Earlier this year I took on the US distribution duties for Warfare Miniatures and I've felt a responsibility to put in more time with those minis to push the ranges. I also hopped across the pond and got in a weekend of wargaming in Scotland and spent three days traipsing around the battlefields of Ireland (excerpts ongoing here) that form the backdrop for my collections - Londonderry, Newtownbutler, Athlone, Augsburg, and the Boyne. Besides being an amazing experience it fueled my fires to put in even more time in the War of Three Kings (hmmm... sounds like a book title).

Anyway, with GW recycling the Necromunda rules with Shadow War Armageddon, my friends and I are preparing to embark on a campaign. The new terrain kits look awesome as well (especially the cool cranes) and I already have half a dozen of them piled on my table to dress up my old City Fight table. The appeal of the new game for my friends was that they could all build gangs - well, strike that... KILL TEAMS... from their existing collections. I can do that too, however, I decided to take the opportunity to build a new force for the campaign, but I thought I would try to do it from the mounds of minis I already have on hand.

After flipping through the rulebook I acquired on Saturday (yes, I know now most of the forces have been out for weeks online, but I haven't been paying attention), I knew immediately what my new warband would be and as a bonus, I could use Rogue Trader era models... 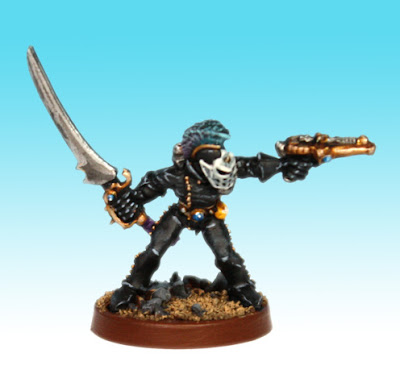 This is Morrobryn the Mime and he is as Rogue Trader as you can get. Yes, he is a bit drab for a Harlequin, but there's a method to my madness. In SWA, Mimes are the Juves of the Harlequin faction. They are just growing into their first role. I decided to take the term 'mime' literally and paint all of my young Harlies in this fashion - if they survive three games, they level up to Players. At that time either the existing model will be taken to the next stage of their costume (and earn his last name), or replaced if their gear has been upgraded.

My starting list is a Troupe Master, a Virtuoso, and two Mimes. The first two will get the full clown treatment with an insane array of diamonds, stripes, hearts, and more. I have around twenty of these old minis (the box set and a handful more) and over time I may build them into a tiny Rogue Trader force to bolster my Eldar.

Harlequins seem very tough on paper, though I think they take some care to play. With only four models they will be out numbered by almost everyone. They are hard to hit at range, but if you can throw enough dice at one eventually you'll get a hit. I'm going to need to pay close attention to the victory conditions of the scenarios as my speed and maneuverability may make it possible to win certain games without even engaging in combat.

I suck at these games anyway because I'm just not competitive. I enjoy the painting aspect of the hobby more and prefer to act as GM in games, but the idea of a campaign with models gaining skills and gear appeals to me (or my likely for me splints and headstones, but maybe I can model those too).