It's been a long while since I've posted anything. To be honest I haven't done much hobby-wise in the last month or so. I decided to remedy this so I set up a game session with my regular crew (Dennis, Jim, and Tom) for tomorrow night using my Oldhammer Donnybrook rules, Several others in our community are using the rules for Oldhammer games, including Thomas Grove over at Give 'Em Lead. In fact, he is detailing his upcoming campaign right now!

A magical artifact lay hidden in secret at the village of Rudeancruden for decades, but that blithering idiot of a priest went on about the thing in the tavern after too many whiskeys and now all of Averland knows the story. The Witch Hunter Marko Steelknife leads a detachment of troops to recover the relic and lock it away properly. However, the young necromancer Henrich Kemlar and the Chaos Champion Maulblade the Doomkin are also on the march, racing to take the artifact for their own. The damnable priest had no faith that Steelknife would arrive first and has compounded his foolery by feeding the talisman to his goats and setting the scampering creatures free!

Donnybrook uses a card driven system for the turn sequence. Here some of the forces available (haven't decided how many points to use - see below)... 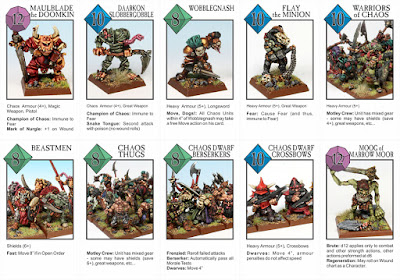 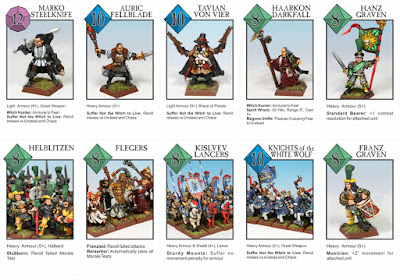 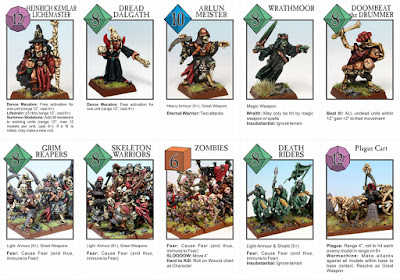 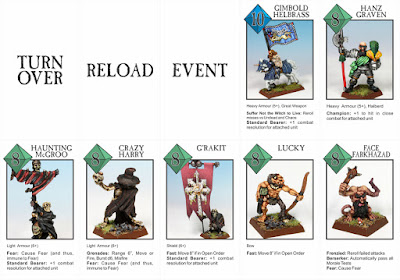 There are many more characters than required so I'll let players choose the ones they want. I relaized I didn't make any d6 characters so the Undead player will get a d8 character with the zombies. When I run Donnybrook, I tend to balance things on the fly (or don't worry about balance and use random events to help shape the action). The default force assumes you have x number points of units - usually 4 to 6. Each point buys one unit. The number of models in a unit depends on the relative strength of the unit:

d12 unit - one model, usually a Character or Monster, You get one d12 Character free as your leader and alter ego on the table.
d10 unit - four infantry or three cavalry
d8 unit - eight infantry or six cavalry
d6 unit - twelve infantry or nine cavalry

For each unit, you may also add a Special Character worth the same die type as the unit you chose (if you pick one d10 unit, two d8 units and one d6 unit, you get one d10 character, two d8 characters, and one d6 character). If you choose extra d12 units, these DO NOT generate extra characters. Some characters must be attached to units, but do not necessarily need to be attached to the unit that spawned them.

What's with the different dice? These are the dice a character of unit rolls for most actions (armour saves are always d6 rolls) in the game. The target number is usually a 6+ (Morale is a 5+) and there are no more than half a dozen modifiers in the game, making it very fast to resolve the action.

Obviously this only roughly balances a fantasy force with all of the weapon and armour options available (not as important in 1690). I choose to ignore the differences. If you want to break the list building rules, you can, but I don't play that way (and make a terrible Warhammer 40k general). Also, every character and unit has special rules for my Oldhammer game, Again, these may or may not balance out. I really find that the randomness of the card action sequence tends to play havoc with balanced forces anyway as one side might have a lucky run and get to activate some units twice while the enemy stands naffing about.

Anyway, I'll try to remember to take pics and notes. Sometimes I forget to record stuff for posterity in the heat of battle!