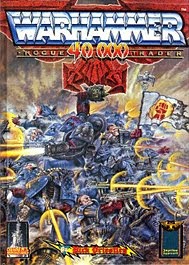 Next up is a couple of pages on Personalities, a section of the book I don't think I ever took notice of before, but since reading it I've been eager to post it. The minutia of rules and weapons changes is not what draws me Rogue Trader. Indeed, I found some of the old rules quite cumbersome. These two pages are simply oozing with character (both literally and figuratively)...

There are a couple of paragraphs on character models joining units, psychology effects (characters gain the psychological traits of a unit they join AND impart their own to the troops!), and the standard modifiers to basic profiles for Champions, Minor Heroes, and Major Heroes.

Using this as a quick guide you can easily upgrade any standard profile.

What came after was something I have never, ever, used...

Variable Heroes
Included here are several variable systems (again, the GM decides) for advancing the stat profiles in a manner different from the standard. Each character level is assigned a set number (or a random number) of stat increases and the player may place these where he likes, up to the maximum for the race.

Another system assigns a pool of points that may be divided across as many characters as the player wishes (or the GM allows). The book suggests that the GM place a maximum on the number of characters allowed "otherwise the player may feel tempted to create a mass of weak, but rather annoying, personalities." (sounds like real life game experience).

Rather than simply allow players to place points where they like, there is also a way to generate profiles with the aid of a d20. Models start with the basic profile and gain a number of increases as above. Roll on the following chart to assign the increases: 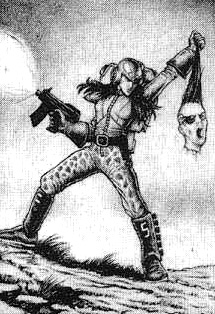 Generating Characters for Campaigns
Finally there are a few paragraphs on setting up RPG style table top games, more on the scale of Necromunda, designed to 'represent the players as idealistic, young, inexperienced adventurers.' Again it is envisioned that a Game Master will be present and the players will all be on one side. The players may also control additional models as henchmen, employees, troops under their command, etc. The character is generated by choosing a basic profile and adding 1D6-2 characteristic increases, distributed at random as above. A player who rolls a 1 or 2 simply begins with the basic profile.

In a campaign, the Player Character may increase one of his characteristics after each game (presumably, of course, if he survives). At the end of each game, the player may receive one point to add to any characteristic he desires, up to the maximum for the race. A character who is unworthy of the advance in the eyes of GM may not gain any experience, although there is no advice on what this constitutes... possibly cowering at the back for the whole game?

To me this seems a very simple, but almost elegant method of handling such things. I can see potential of abuse among power gamers, but I wouldn't attempt such a thing with those types of players anyway. It was among the surprise gems I've found since starting to read the book cover to cover. I'm sure I was aware of these rules at one time, but I know I've never used them.