Support Weapons fall outside the category of Heavy Weapons because most have their own unique rules. There are lots of HUGE missiles and bombs available in any of the grenade types (from the last post) that are designated as x2, x3, x4, etc. with the number meaning a multiple of standard template diameter. These would be referred to as 'x5 Scare Missile' or x3 Toxin Missile. SUch weapons are launched from off the table, deviate on a 2+ on a d6, and scatter d20".

Beyond that there are several interesting entries... 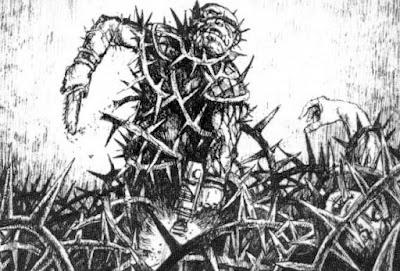 Bio-wire Bomb - Missiles are used to deliver this strange weapon. Each bomb contains special seeds, growth medium and nutrients for a plant known as bio-wire. It grows almost instantly, is extremely tough, regenerates quickly, and it's sharp thorns will penetrate most armour. It is deployed as above and covers a 4" diameter target zone. The area is treated as very difficult terrain, reducing movement to a quarter. In addition any model moving receives an automatic Strength 5 hit, though armour saves do seem to apply.

Further more, roll a d6 each turn... if the result is a 6, the Bio-wire expands, increasing the radius by a furhter 1/2". Most weapons will not affect it, though a chainsword or power weapon may be used to cut a path allowing movement at half rate and fire based or anti-plant weapons will clear an area equal to their area of effect.

Disruptor Beacon - These devices emit a constant signal that makes radio communication impossible while the beacon is intact.

Homing Beacon - May eliminate the deviation roll for Support Weapons.

Mine Missile - Used to scatter an area with a 12" radius with thousands of tiny, coin-sized mines!

Nightlight - These missiles fully illuminate the table for 2d3 turns.