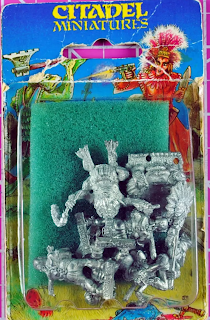 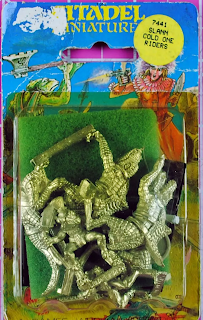 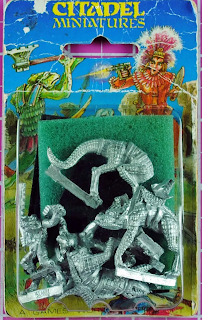 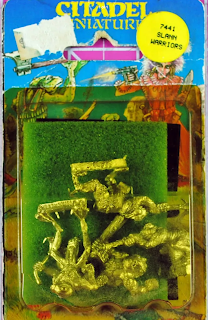 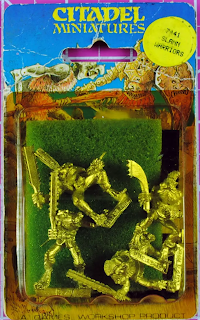 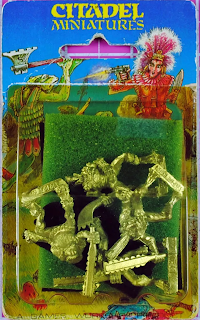 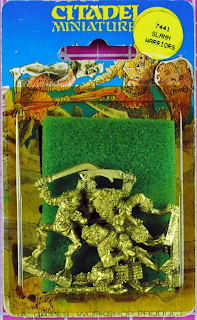 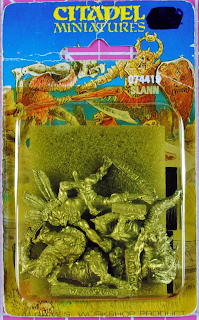 I like buying Oldhammer stuff in lots rather than piecemeal. These were individual auctions on eBay, and seemed a little pricey until I broke it down - the total came out to roughly $11 per model which is pretty much the same as modern GW stuff. The chance to get it all at once (with free shipping as well) made this something I couldn't pass up. I've always wanted a Slann army, and this gives me a great skirmish force to build on...

Hero (an Alligator Warrior, not pictured here, that I bought some time ago)
Wizard on Litter
4 Bull Slann Riders
12 Spawn Band Warriors (or Bull Slann - the models seem to work for either)
4 Venom Tribe Warriors
1 Slann Beastmaster with 2 Slann Warhounds (never seen this model on eBay before)

Not an all conquering horde, but it will be fast and fun to paint and I can add to it as I go. My immediate goal is to get another Bull Slann Rider and 6 Venom Tribe Warriors to make 'legal' units. I also want to boost my Spawn Band to 15 models - perfect for 3x5 formation or 4x4 if the Hero joins them. Although I'd like to add an Elite unit, the thought of fielding 10 or 12 of the same model makes me shiver - maybe Jaguar Warriors as the model looks easy to add some variation by bending the arm. I'd like a unit of Human Slaves as well, though I'm looking at converting my own (more on that at some point as I already have ideas).

Anyway - no idea when these will join the queue (they are still in the mail anyway), but I was excited with the purchase! Yes, I'm still painting Oldhammer zombies too - I just haven't had time to take photos (see the 70 and 80 work weeks thing above).
at 7:28 PM