Something Stinky This Way Walks

I've had a rough time focusing on a single project of late. I had a goal to paint all of the Rogue Trader Adventurers by the end of the year, but my inability to find the Test Bed Slave model so far has derailed my progress. I still have ten or twelve others to paint from the range and I can easily do these at the rate of two per day, so there's still plenty of time. If I manage to find the model, I'm sure I'll be inspired to jump back in. I also have a few models left to paint for my Last Stand at Brandon's Star IV scenario, but again they've been sitting on the painting table and wandering through the room hasn't pulled me to the desk to finish them. It's going on more than a week that I've painted anything. 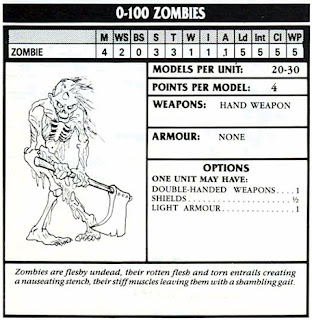 That means it's time to turn my attention to something else. I've been really into zombie apocalypse books recently (and Z Nation which I actually enjoy more than the other Zombie TV series), so for the spooky month of October, I decided to add a unit to my Oldhammer Undead army!

The plan is to paint a maximum sized unit of thirty of these rotting shamblers, including a wight or wraith hero and the goal to to have them table ready by Halloween. They will be armed with double-handed weapons and come in at 150 points (including the standard bearer) plus the cost of the hero (TBD). That will put me reach of 1500 points total with the addition of a couple of support units like chariots or stone throwers, both of which I already have squirrelled away.

That may be pushing it. While they lack fiddly detail like belts and buttons, there are still multiple areas between iron, cloth, flesh, muscle, organs, and bone, all of which need different techniques. On the plus side, these areas are a little difficult to distinguish on some of the sculpts so can be painted as the mood strikes! 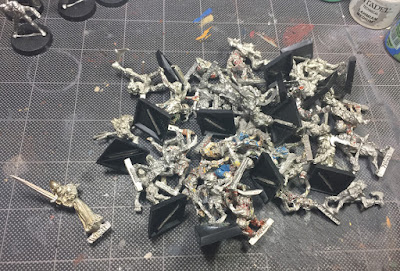 I actually have more than thirty, but not quite enough for two units of twenty. If I manage to finish these lads by Halloween, I may treat myself and pickup another half dozen from eBay. These models go for ridiculous prices, but it may be worth it to see two units (my eyes glaze over at the thought of the ability to field up to 100 zombies)!